Cutting Through the Noise: Fake News’ Impact on Climate Communications Your alarm sounds. You roll over, reach for your phone, and check social media. Scrolling past a surprising headline, you share it with your friends. And each day, the ritual repeats.

Social media’s influence is powerful, especially in regards to climate action. Platforms like Twitter, Instagram, TikTok, and Facebook are increasingly popular arenas for exchanging information about climate change. Incredibly, 3.6 billion users worldwide have access to the latest news through these platforms in the palms of their hands.

However, journalists at the Pew Research Center recently discovered that adults who rely on social media as their primary source of news are less likely to follow major news stories closely. As a result, they are also less knowledgeable about the topics discussed in those news stories.

This finding begs the question: Why are adults who use social media platforms — backed by the almighty power of the Internet — less educated on major issues like climate change?

People who use social media for news often communicate exclusively with like-minded people. Most users are not aware they have this preference, which psychologists have named confirmation bias: the unconscious human tendency to favor information that confirms our pre-existing beliefs. 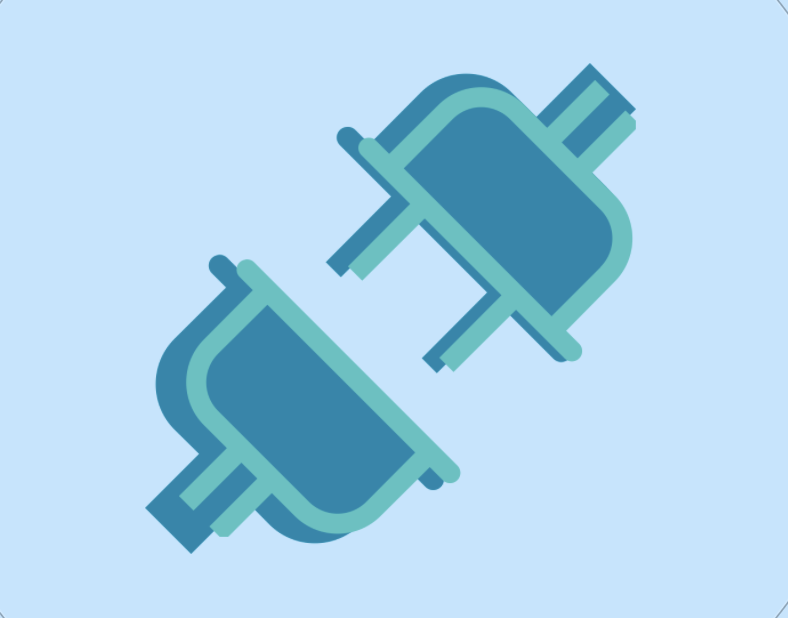 Social media companies are well aware of this bias, and use it to their advantage to increase engagement with their platforms. Scrolling through posts that support our beliefs caters to our human needs for belonging and positive reinforcement, which encourages continued use of the platform. Repeated exposure to like-minded content can blur the line between fact and fiction, distorting the truth into “my truth versus your truth.” This has disastrous consequences for the climate crisis, as people remain unchallenged and continually reinforced by like-minded users.

One consequence of confirmation bias is the polarization of climate communication into “activist” versus “skeptic” categories, decreasing the likelihood of users being informed on both sides of an issue.

Twitter is particularly guilty of funneling its users into echo chambers, or online communities in which 90% or more users share the same view. This separation of users is manipulated by a platform’s algorithm, an automated gatekeeper that filters content based on what the user has interacted with in the past.

Because echo chambers foster attitude-based homophily, or bonding based on shared beliefs, they are easily influenced by opinion leaders. Opinion leaders are highly engaged on their chosen social media platforms, and hold the power to interpret and distribute information to their large followings. They have the social clout to promote widespread discussion and mobilization of climate action; on the flip side, they may frame the issue with skepticism and contempt.

Leonardo DiCaprio is an example of the former. The world-renowned actor uses his online influence to promote the Leonardo DiCaprio Foundation (LDF), which raises awareness and donations for conservation, climate change mitigation, and innovative solutions.

Opinion leaders like DiCaprio are integral actors in climate communications because their broad social media influence stirs public interest and mobilization, which are often prerequisites for government action. However, the nature of social media affords everyone the opportunity to gain influence, which inevitably results in some opinion leaders with misinformed perspectives.

Opinion leaders have this role due to their large followings, so it is the responsibility of each individual to remain critical and not accept all of their messages at face value. 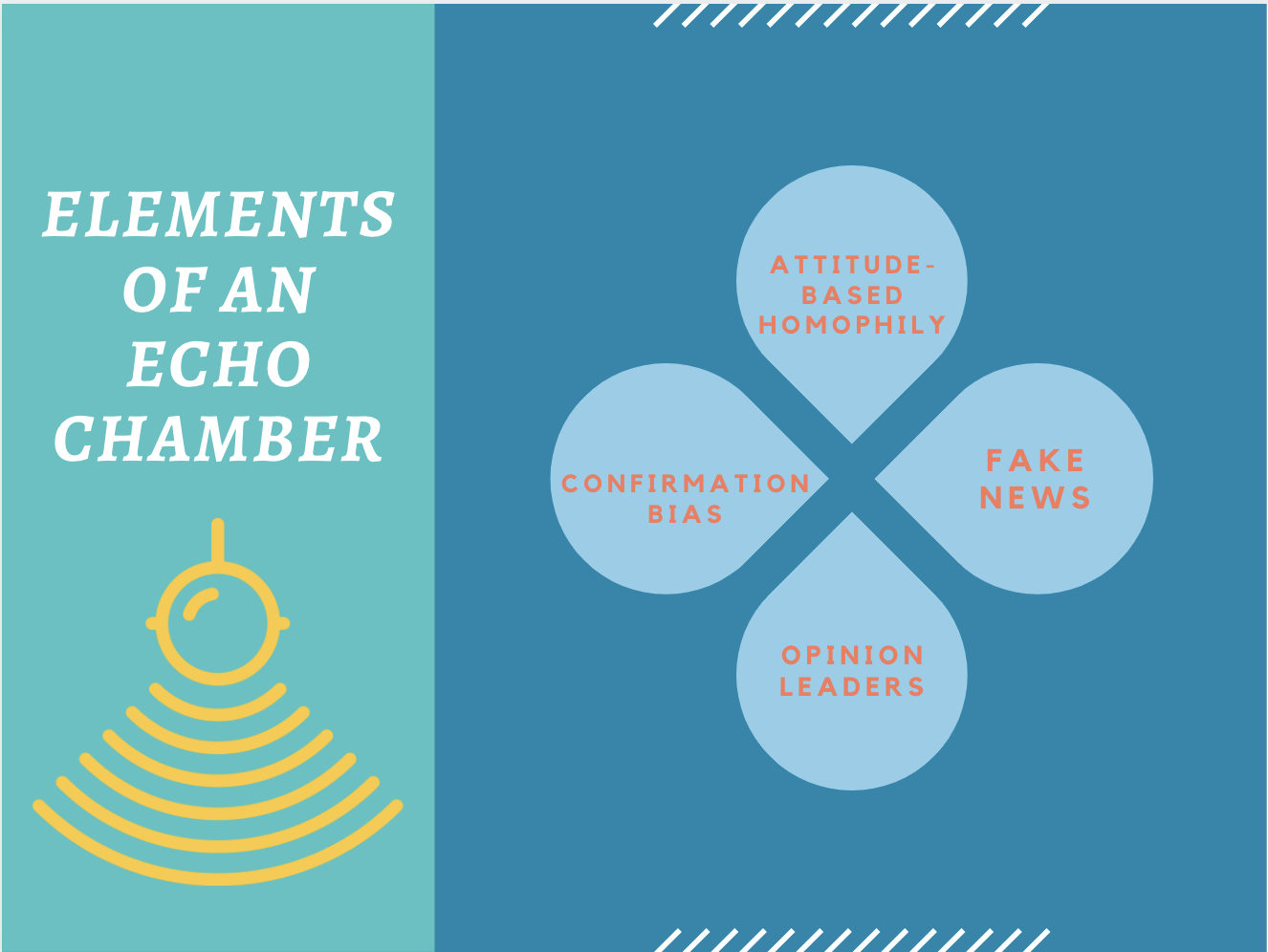 Recognizing the characteristics of an echo chamber can prevent users from maintaining a limited understanding of climate change.

There is an overwhelming amount of misleading, inaccurate, or blatantly false information that circulates around social media. Commonly described as fake news, these inaccuracies can be divided into two categories: misinformation and disinformation. 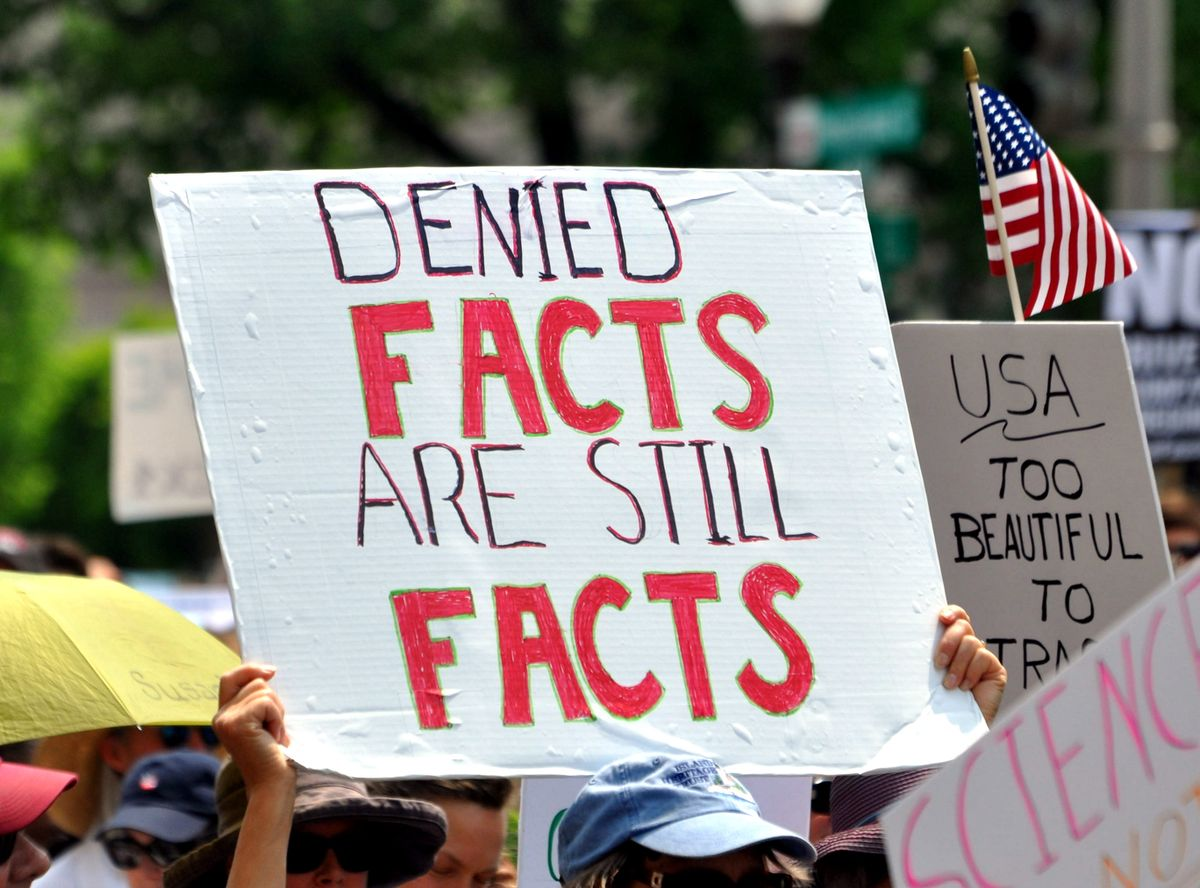 There is an increasing call in the United States for addressing the misinformation surrounding climate change (People’s Climate March 2017 in Washington, D.C.; Photo Credits: Edward Kimmel/Wikimedia Commons/accessed at https://newsroom.ucla.edu).

In 2018, researchers found that fake news on Twitter “diffuses significantly farther, faster, deeper and more broadly than the truth, in all categories of information, and in many cases by an order of magnitude.” The more egregious the false claim, the faster it spreads. But bots weren’t the culprit — a majority of the misinformation was spread by peoples’ knee-jerk retweeting, propelling inaccurate stories. Fake news does not diffuse rapidly because of biased algorithms or unmindful shares alone, but a pernicious combination of the two.

Where do we go from here?

The abundance of echo chambers and misinformation on social media helps explain why people might have skewed understandings of climate change when these platforms are used as their primary news source. As climate communicators, we cannot interpret these obstacles as an excuse to write off social media as a news source, but as a call to improve it.

This requires swiftly detecting misinformation, which, like a virus, is easier to control when fewer people are exposed. Researchers have proposed that inoculation, or early warnings to users that a piece of misinformation about climate change may be politically motivated, effectively “vaccinates” the public against the brunt of the claim. 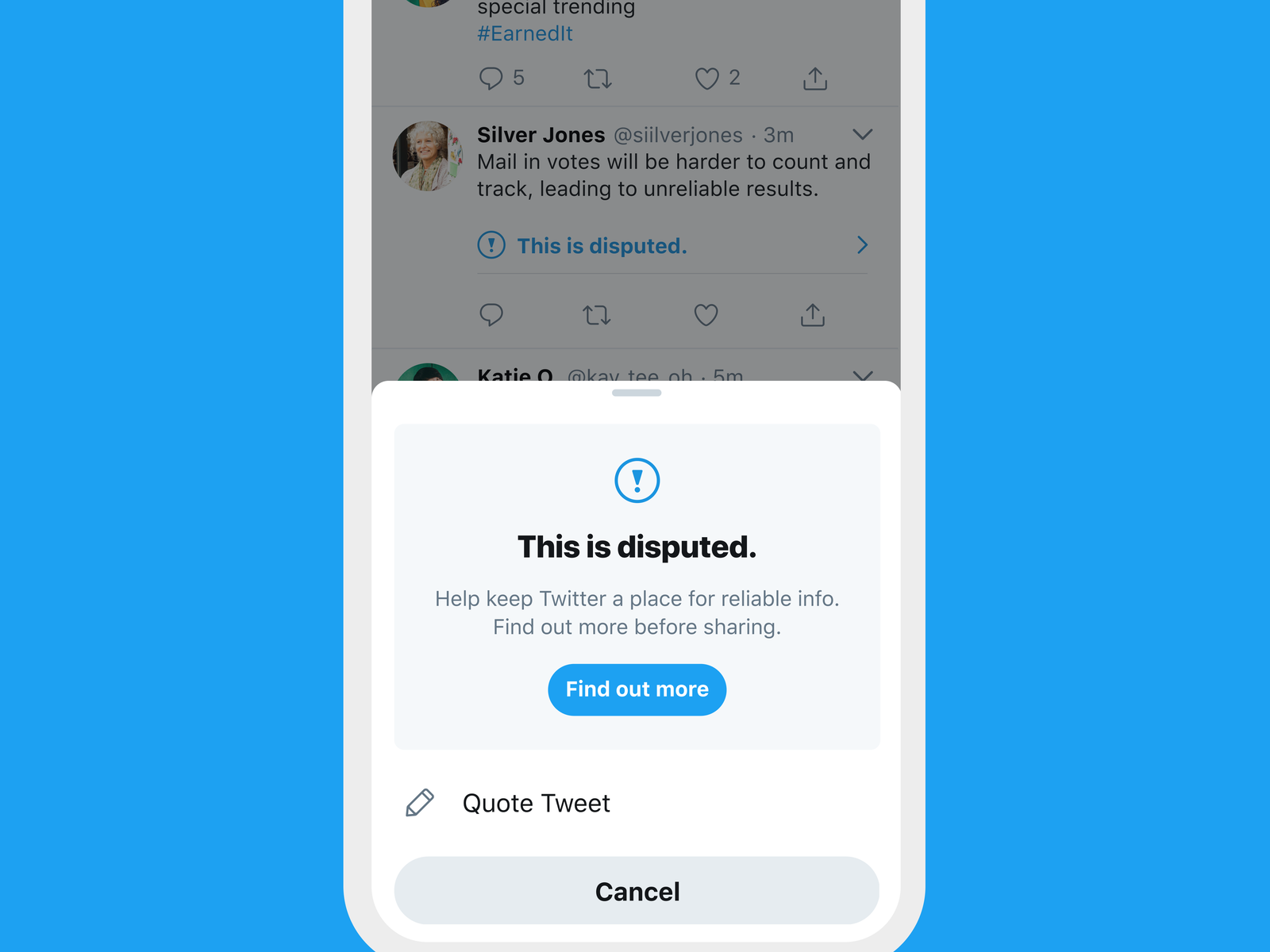 Twitter launched a feature in October 2020 identifying disputed tweets to prevent the spread of misinformation around the 2020 U.S. presidential election (Photo Credits: Twitter/accessed at https://www.npr.org).

If a social media platform has already been “infected” by misinformation, a collaborative response, where multiple users respond to the false claim with website links, scientific findings, or events that correct it, is the next best treatment.

Echo chambers and attitude-based homophily will continue to run social media platforms as long as their corporate executives allow it. Until these issues are addressed, climate communicators may use our awareness of their existence to maximize the impact of our message by breaking through the choir barrier and initiating dialogue with users whose echo chambers do not overlap with our own.

As consumers of social media ourselves, it is imperative that climate communicators exercise care when navigating echo chambers and fake news. Digital literacy encompasses critical thinking skills for finding, evaluating, and communicating online content to others. As you scroll, ask yourself questions like:

Developing, exemplifying, and teaching others digital literacy is an antidote to the misinformation about climate change circulating around social media. 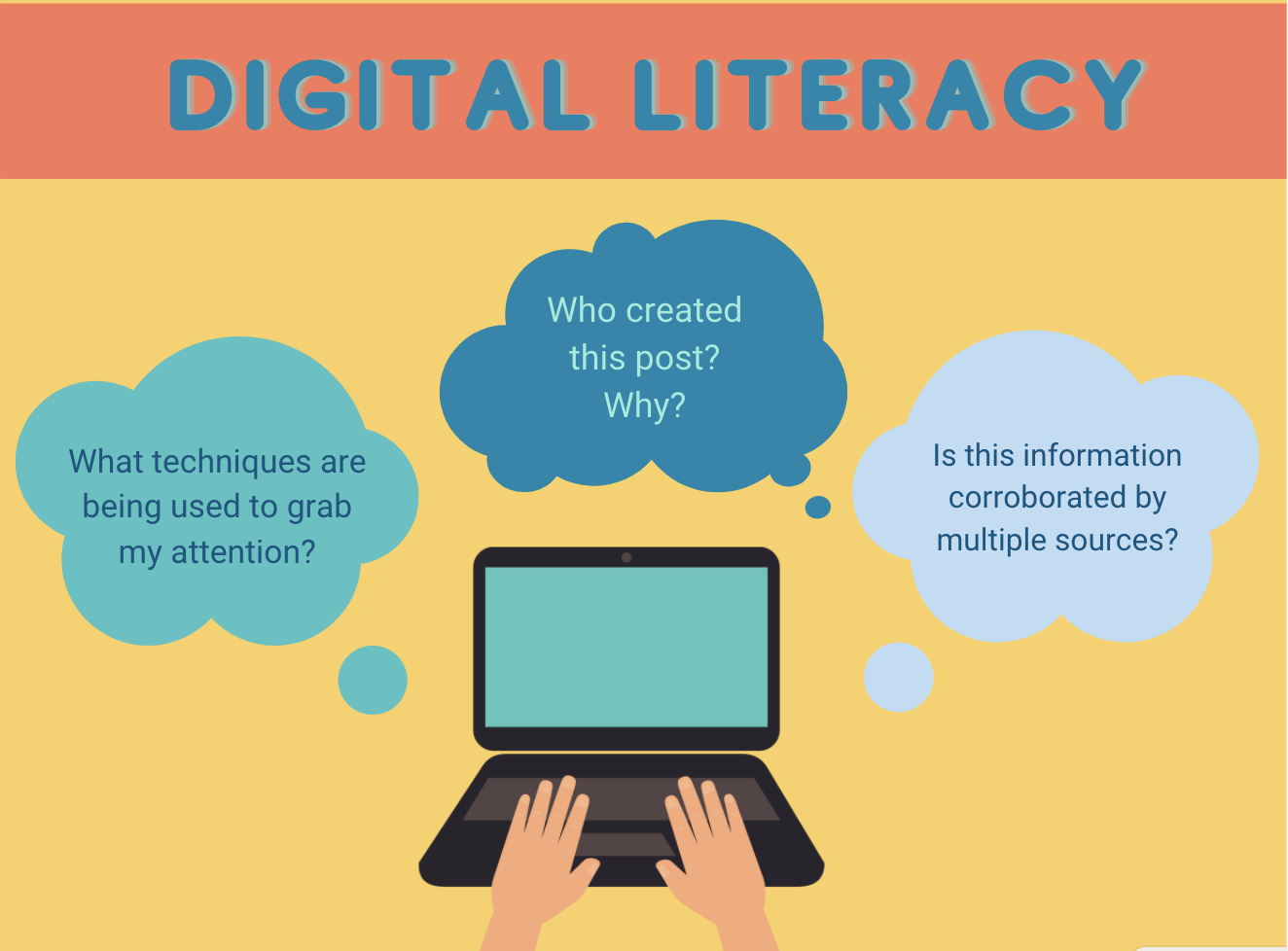 Asking yourself key questions about a post on social media before sharing it to others prevents the spread of misinformation.

Cutting through the noise

As climate communicators, we may channel our awareness of echo chambers and misinformation into actively broadening our online audience and collaborating with other climate allies to dispel false claims.

As consumers of media, we must reference neutral news sources — The Hill, Forbes, and Christian Science Monitor, to name a few — before sharing information across social media. Exercising digital literacy equips us with the tools to cut through the noise on social media and hear the truth about how we can take climate action. Stay vigilant, and happy scrolling.

A Roadmap for the Climate Communicator
January 18, 2021